On the plane ride from Juneau to Anchorage I sat next to Ketchikan artist Evon Zerbetz, a children's book illustrator on her way to the Alaskan chapter of SCBWI (The Society of Children's Book Writers & Illustrators) conference which was also in Fairbanks that weekend. She told me about something she's into called "artist trading cards".

Later, I went into google and did a phrase search for "artist trading cards" and came up with tons of hits. This is a link to the first site called ARTIST TRADING CARDS: A COLLABORATIVE CULTURAL PERFORMANCE. I chose to link to the page that talks about what they are.

A synopsis is that you make little versions of your work, whatever the medium, on card stock the size of baseball trading cards (2 ½ X 3 ½ inch or 64 X 89 mm). Then you can trade these cards with other artists that you meet at openings, or by mail etc. According to this website it's not just the trading of art, but also of stories and building up artist communities etc. I guess it's been going on for a long time, since the mid 80s according to one website, but this is the first I've heard of it. I'm going to make some cards up tonight and this weekend, then scan them in to post on my website. So if any of you out there would like to participate, just let me know!

In other news, someone keyed my tracker last night. I was working late at the library, I came back from my dinner break at 7pm and when I left work at 10pm there was a huge white gash through the black paint that went from one end of the vehicle to the other. I was so upset. It's a ten year old vehicle but I've taken excellent care of it and at one point several years ago I had nearly every panel, including the hood, replaced.

Why I had to get all those panels replaced is an interesting story by the way...in fact it's one of the strangest things that's ever happened to me in Alaska. My friend Susan Gardner was living in the Kiltcher homestead cabin. To get to this cabin you have to drive 10 miles outside of Homer Alaska down a dirt road to a STEEP switchback trail that ends up on a long beach, at the end of which is the Russian Orthodox village "Voznesenka".

The only way to get from the switch back trail to the village was to drive along the beach. Just up from the beach was the Kiltcher cabin. The owner (Jewel Kiltcher's aunt) was in a land dispute with the mayor of Voznesenka. She had put up a wire fence around her property which prevented the citizens of the village from getting to the trail at high tide. The only vehicles the villagers had were ATVs (4 wheelers) and at night they would sneak onto the Kiltcher property and cut down the fence.

My friend Susan and her husband Chris (who was working as a sports fishing guide for Halibut in the Kachemak Bay) were "cabin sitting", watching out for the Russians and taking care of a couple domesticated horses in exchange for free rent for the summer. The cabin didn't have any running water, plumbing, electricity (refrgerator, stove, etc.) but it was kind of cool and a step up from the tent they had been living in. We found some old cabin journals and found some entries written by Jewel herself when she was quite young. She drew sketches of the horses and wrote some REALLY BAD poetry (but hey, my poetry at that age was equally bad, and probably worse..in fact, here's a poem from when I was 15 (I've been keeping journals for a long time)

"A fiery bird,
flys above my head
waiting to see
when I'll be daed.

I turn around,
strarting fresh,
to save my soul
I'll sell my flesh"

WHAT THE HELL? or this one:

"a little ring
around
a very little finger
and though she
loved
him dearly
she squeeze
and pulled
the trigger."

Yes I was a messed up kid But I digress, back to my wild horse story)

I went to the cabin in Katchemak Bay with my sister and some friends to stay with Sue and Chris. Sue told me that it would be OK for me to park my tracker on the beach. I saw that just a few yards up the beach there was a band of apparently wild horses that were just hanging around. I asked if I could park my car in the corral with the domesticated horses but she assured me that everyone parked on the beach and that the horses (which were indeed wild) never paid any attention to them at all. I was skeptical but I trusted my friend so I parked, took the mountain bikes off the tire mounted bike rack, and proceeded up to the cabin.

We hadnt gone 100 feet when I heard a loud metallic THUMP THUMP THUMP sound. I turned around to see that the horses had immediately surrounded my tracker. The "leader" was kicking in the driver's side door and snorting at me. The others (around 6 in all) were hitting the tracker with their heads, denting and scratching through the paint with their TEETH! It was the most bizarre thing I had ever seen. They were chewing on the foam padding that covered the metal bars of the bike rack, scratching the glass of the windows, licking the dirt and literally pounding on the truck with their teeth. The hood was so badly dented that it couldn't be fixed and had to be totally replaced. In fact, as I stated before, nearly every panel on the entire vehicle had to be replaced.

I was afraid that my insurance company (state farm) wouldn't cover the damages, I wasn't sure that "attack by wild band of horses" would qualify under my policy. I did a lot of research and was ready to have to really defend myself but the appraiser was so shocked at the damage that he didn't even dispute it. He said that as far fetched as the story sounded, he couldn't think of anything else that could leave teeth marks and dents like that on a vehicle.

I was going to call into one of my favorite radio shows "Car Talk" to see if they had any theories on why these horses decided to go medieval on my tracker, but I never go around to it.

Anyway, since I had all of the panels replaced, even though the car is 10 years old it looked relatively new. And now I have this huge nasty scratch down the side which makes me feel like I've been marked with a scarlet letter. I mean, I didn't park too close to anyone, or cut anyone off, the only thing I can think of beside senseless vandalism, is that it's the work of one of my students.

Several of them learned recently that they've missed too many classes and there's no way for them to not receive a flunking grade for the semester. I got a rather mean sounding garbled message from a young man on my answering machine while I was at conference. I couldn't hear exactly what he was saying, in fact he sounded a little drunk but still...I hope that's not the case but regardless of why someone did it, it made me feel like crap. Not to mention the fact I don't have insurance or out-of-pocket money to get it fixed.

I think if people need to act out their anger like that they should at leaste do it towards people who can afford it!

Speaking of money, even though I was out of town for a week, I didn't buy a single thing! I'm doing an excellent job of sticking to my anti-consumer pledge.

One nice thing did happen last night when my friend Jeff Jemison, a fellow artist/photographer/videographer stopped in to say hi at the library and we ended up talking for a long time about our art enterprises and various projects that we're working on. He's going to be in a First Friday art exhibit at KTOO tomorrow and will have prints of his Easter Crab available for purchase from his webiste Alaska Visuals. 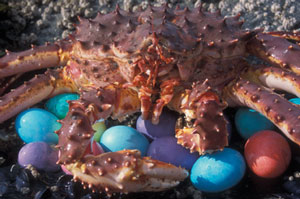 I want to get some to send to my family and friends for easter. It's just a lot of fun for me to talk to other artists like Jeff who has a lot of ideas and keeps me motivated to keep working. I also got a call last weekend from Mike Maas offering to help me fix the messed up audio on Kite Club so I can add it to a DVD our Hidden Alien Productions is putting together of all the movies we made in our first year of existence. I'm going to try and get over to his place this weekend and just get it done. When it's really finished I'll stream a version that's more compressed than what's there now.

What else? Oh yah, Jeff says I write too much?

I can't help it...it helps me with my thought process to write things down. Then later when I forget about it I can always do a search in my archives and find again what I was meaning to do. Blog/journals are great for that.

By the way, thanks to everyone who sent me emails with tax advice. That was very awesome of you to take the time to do, and I found it INCREDIBLY helpful. I already feel my panic subsiding.

Right now I'm listening to "Over the Rhine" disc II from "Ohio". It's SO DAMN GOOD!

OK, I'm going to get started painting up some artist trading cards. Remember to let me know if you'd be into doing a trade.

ATCs are great! I'm willing to trade...just got to make a few new ones...

Yes, let's trade! It will just take me a week or so to make some that I like and get them posted on my website.

I would love to do a trade. I do watercolor and pen and ink.

For some reason this particular entry keeps getting spammed by an online gambling site so I'm closing the entry and not allowing any more comments to be added to it. If you are interested in trading artist cards or on commenting on some other aspect of this entry, please just post your comment to any other entry and just add at the top what it's regarding. I still receive all comments by email so I'll still get it regardless of where you post it. Or, you could always add a comment to the guestbook or send me an email. Sorry for the inconvenience.
Elise