So, it's taking longer to get my stuff organized online than I thought it would. Last night I took a bunch of time fixing my style sheets so they work better with Firefox and then updated several of my galleries (the "in progress" photos were from 3 shows ago!)...

Anyway, I tried to shoot some photos of the changes that I made to older work etc. tonight but it's too dark. I'll post them below anyway to give you an idea but I'll need to reshoot them in daylight to get better color.

This photo is of me just starting to work on my painting titled "The Blue Tatoo" from 2006. 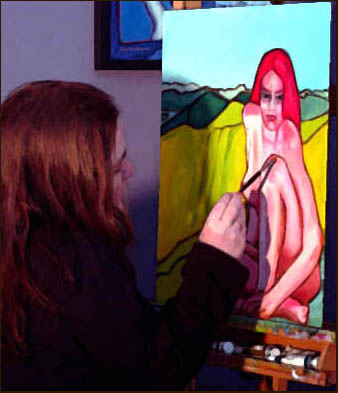 Below is the same photo as it looked when I displayed it at the Two Crows studio (the show where I met my husband!). Below it is the painting as it looks now. I was always bothered by her eyes in the original, which seemed too close together or a little cross-eyed...and by her hand. So, I fixed those (including painting out the large ring) and also added a little shadow to her inner thigh and fixed her feet and some other highlights here and there, including the addition of the hair hanging in her face. I also added highlights and shadows to her tattoo, which seems very flat in the first version. 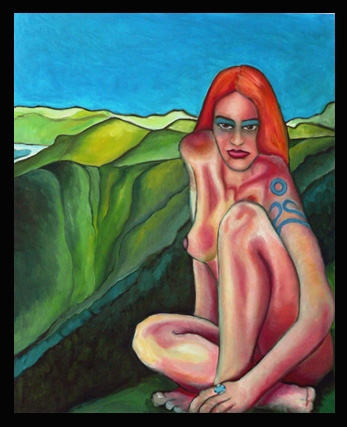 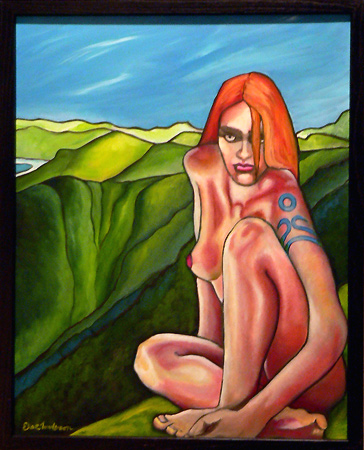 I think she looks rather menacing now, almost like she's looking at something over your shoulder. Aaron thinks her mouth makes her look like a vampire which is exactly the look I was going for (but without being too obvious) I really like the affect. It's amazing how a few relatively minor changes can alter a painting's vibe so much. It went from being one that bothered me, to being one of my new favorites!

Anyway, this painting is 16" x 20", you get a feeling for scale by seeing the photo with me in it. It is an original oil painting on wood panel. I was selling it for $300 in 2006. I was going to try to sell it in Anchorage for $325 (at the gallery that closed right before my opening), but I think I'll price it at $275 at Annie Kaill's, since the economy is tanking so badly.

Below is a smaller painting done for the same show as the The Blue Tattoo. The first version has summer colors, where the revised painting has less brassy, more subtle fall colors. I also added the spirals in her hair, mirrored by the spiral on her pendant necklace (which I still intend to lightly outline once it's dry). I also repainted her face and neck, toning down the reds and I painted out the bright pink flowers that were in the background of the original version. I need to re-sign this one after it dries.

An even older version of this painting was used as inspiration for an online poetry contest some time back. A few of the poems were OK. People are always lifting images from my site for various things and usually I don't mind, and in this case I was pleased to stumble across the site while googling myself (naughty!).

It was originally for sell for $175 dollars but I'll sell it now for 135 framed plus free shipping. It is 9"x12", original oil painting on wood panel. 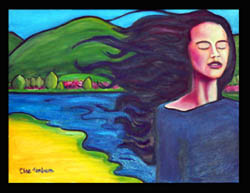 In the next two images it's harder to see the changes because I could only find this little thumbnail photo of the original before the changes. I actual fixed a lot of problems with this one, the feet, both hands, I added more definition to the hair and made the color more subdued. I straightened and thinned all the lines, and added the wings (which I still need to add a small amount of outlining and finishing details to) I also fixed her face, which was at a slightly weird angle in the first version.

Her skin tone is not as pink as it appears in the most recent photo, that was just a problem from taking the photo tonight in the dim lighting, I plan to shoot better photos of all of these soon. 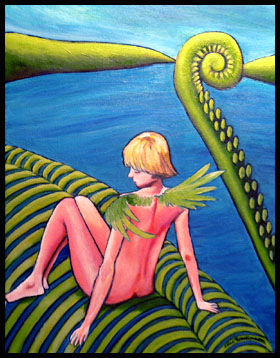 Similarly, I couldn't find anything but a rough thumbnail of this painting from my exhibit at Annie Kaill's Gallery.

If you look closely, you can tell that in the original painting the woman had blue hair, the cat had it's eyes open, and the figure was totally nude. I didn't realize I did it but Aaron said to me after seeing my changes "you made her Hawaiian!"...I guess I was inspired by my recent trip!

I still think I will subtly change the color of the mountains in the far distance but other than that, I'm really happy with how this one turned out. 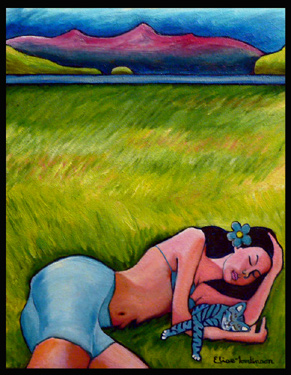 Still, if you're interested in any of these, email me and I will send you a better photo of it, including detail shots. Remember that the 25% off sale with free frames and shipping etc. is only through the end of December and that free shipping is for US and Canada only.
:)
More to come!
Wheeeee!!!

I notice that you painted over one of your signatures you do replace them don't you? :P i think they all look very nice especally the little fairy I think it is, the one where she has wings also the hair god one

Hi dad, yes, if I paint over the signature I will resign it but I have to wait until it's totally dry first!
:P

the menacing look comes from the lack of humanity involved with her eyes.
You removed the iris?

I did some self photo shots by a tree and had these leaf designs all over my back and fanny...looked like tattoos, though I would never get one on purpose.
Oddly enough, though, the photos helped create a dimension I was not expecting.
(just go to you tube, type in my name as a single word, you'll see it)

But, wow!
That shack on the water down there is a phenomenal piece!
Geez, just water, mountains and that shack and it draws you in....I LOVE it!

Well, enough crying, eh?
About painting over your signature...hey. You know they'll be able to see that in the future, right?
So, if you paint over it (with your oils) then take a toothpick and rewrite the signature with a scratch off on top of the signature.
It leaves an amazing line of color.
Or, use the eraser side of a pencil.
Either will give it a cool effect.

I hear ya Berry! It's a tough time to sell art, but the "value" of a piece shouldn't be based on what you can sell it for. Actually, the two have nothing to do with each other.

And just think of all the people who got to buy art work who normally would not have been able to afford it, it probably will be a prized possession and bring years of happiness.

That is worth a lot too.

I will check out the youtube at home, can't surf stuff like that from work, even on my lunch break.
:)