[Previous entry: "Fun weekend in Homer but no joy painting"] [Next entry: "Selling art IS important after all"]


Saturday Aaron and I attended the Eagle Totem Pole raising at UAS. The funds for this totem pole were raised primarily by the Alaska Native student group on campus. The Tlingit clan system is divided into two reciprocating halves or (moieties). We already had a totem pole representing the Raven moiety, so we needed an Eagle totem to represent the Eagle moiety and provide balance on campus. 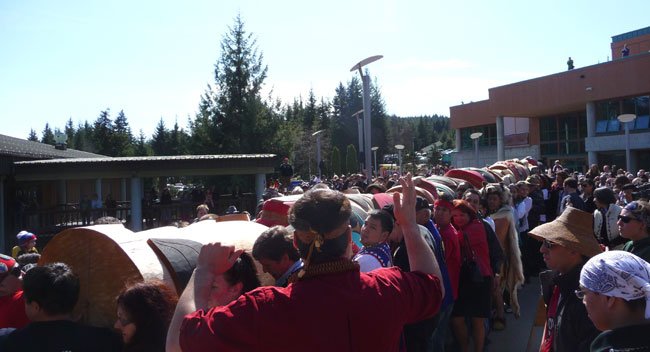 Carrying the totem pole to the location where it will be raised is a community event. The totem pole stops several times along the way so that everyone who would like to participate can take a turn carrying the pole. My husband Aaron was on campus over 15 years ago and helped carry the Raven Totem Pole. He helped carry this one on the first leg of its journey. 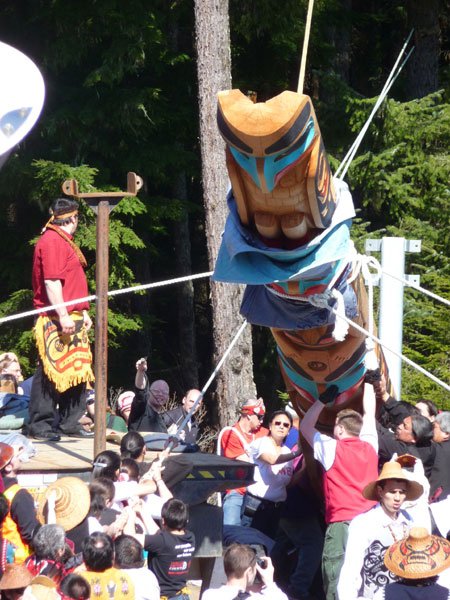 There was a crane on hand for safety purposes (required by the university) but the actual raising of the pole was done by hand. This totem was made from a massive 400 year old cedar tree measuring 36 feet long! Strong ropes were looped around around a pine tree high up to create a pulley system. The entire endeavor was incredibly impressive. As the Eagle pole was starting to be raised, two very large eagles swooped down out of the sky right over the totem pole. It was incredibly moving as the crowd erupted into applause and in some cases tears.

This was at the University of Alaska Southeast where I work in the library (the building to the left of the totem). Today, about a quarter of our students are Alaska Native and the entire Auke Lake campus was built on Alaska Native land; the campus tries to remain respectful of that fact. The gap in the crowd was to allow the seated elders the opportunity to view the pole being raised. Tlingit, Haida, and Tsimshian show incredible reverence to their elders which is something I highly admire about their culture.

The construction and raising of this totem pole was long overdue. One elder of the Eagle clan said that the raising of the pole was like the sun coming out to dry the tears from their faces. Very beautiful day filled with lots of Alaska Native dancing and ending with a big pot latch. It was a beautiful, beautiful event!

From a story in the Juneau Empire: "Seemingly to grant their blessings, a pair of eagles spun in the air above the gathering and a raven flew to a tree perch. The crowd sang out in Tlingit "Wooch Yax," in Haida "litl Tlagaa", and in Tsimshian "Na Yuubm." A "balance" had been restored at the campus on Auke Lake."

For more info (and for a photo of the carving in progress) see these stories from the Juneau Empire: Eagle totem to be raised at UAS and Eagle totem brings balance to UAS campus.

This is really great. I always wanted to know more about native Alaskann, still have no time. their culture is so intersting and rich!