I'm back at work again. I taught two classes today, LS110 and LS111. I think they went fairly well...one of them is distance delivered and has low enrollment this semester so it will be MUCH easier than the fall. My boot spikes came in this afternoon... the University of Alaska Southeast bought all of its employees these rubber bands with studs on the bottom of them that you can slip over your boots for extra traction in the snowy parkinglots and sidewalks. I think that was very cool of them. I tend to fall down a lot in the winter, I'm not the most coordinated person even in the best of times.

I finished the painting for an English professor who is submitting it to a journal along with a wonderful poem of hers that they are publishing. I'm not sure they will like the painting, or choose to use it, but she loved it. That was the most important thing to me.

I had to paint in black and white, as the journal does not print anything in color. I realized just how much I do my compositions based on color. It was a challenge to try and do an interesting composition without using color as a crutch. I won't be switching to black and white anytime soon but it was nice. I don't draw as much as I used to so it was a good exercize all around. She has purchased one of my paintings in the past and now wants to commision me to do a larger painting based on this small one I did for the journal.

The poem is about the theme of falling and I made the painting specifically inspired by that poem. I would post it here only she doesn't like her work to be published online. Her name is Alexis Easley and the poem is titled "Vertigo" and will appear in the next volumn of the journal "Women in Performance" with or without my painting...but in case you're interested. Here is the image I did for it: 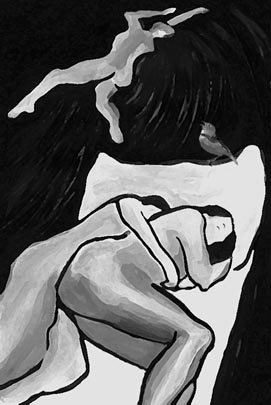 Anyway, I was feeling kind of sick last night and after getting home late from work I laid on the couch watching TV until almost 11:00pm. I knew that Alexis needed the painting asap so I forced myself to start something. I could already see in my head what I wanted to do, so that made it somewhat easier. I came up with the one above on my first try. I also played around with it in a bunch of PhotoShop filters but I ended up like it just scanned as is, best of all. Still, I was up until 3:00am working on it. I can not start doing art late in the evening on a work night because I won't be able to sleep afterward. I'll just lay in bed thinking of how I want to change it and then run back upstairs to keep working on it. I am happy with the results though.

You know, I'm listening to the news they are talking about the bird flu. Last winter it was SARS. It seems a lot of these new strains start out in asia and they are our number one visitor here. Juneau is such a bizzar place in that regard. Imagine a cozy little hamlet. Downtown Juneau looks like a miniature San Fransico. It is the capital of Alaska, and yet there are no roads in or out of town. In the winter, the downtown area is very dead. Half the shops close up completely and others way reduce their hours. The legistlature is in town during the winter though, so there are lots of suit types and state employees wandering around down there during the winter.

Then, in the summer the cruise ships start coming. These monster cruise ships coming up the Inside Passage can carry thousands of passangers and we can have up to 4 or 5 ships in port at a single time. This increases the population of downtown Juneau from a couple hundred to 10 thousand or more. You can walk around down there in the summer and there are street vendors and expresso stands and people speaking all these different languages just like a real city.

But, the long way to my point is that the majority of our tourists are from Asia, and last winter we had a passanger in town end up in the local hospital with SARS. So, while I feel relatively safe from all of the level orange terror alerts etc. I feel very exposed when it comes to pathogens. Have I mentioned how neurotic I am?

Some people hate the tourists but I guess you get that in any town that is also a tourist destination. I happen to enjoy having them around. I often miss living in a bigger city. I must say though, that for a city the size of Juneau/Douglas...we have an incredible amount of things to do. Not even getting into the outdoors stuff which goes on and on, but we also have an amazing symphony, the largest and most award winning theater company in Alaska (which is right across the street from me and where I volunteer doing stage painting from time to time), also lots and lots of art galleries and small independant film venues and the like. We even have our own twice a year short film fesivals for the local directing community. It is the perfect environment for an artist like myself.

I am so excited about my opportunity to have a solo at one of the downtown galleries this summer at the height of tourist season. Don't worry, I'm not selling out, I'm just excited that I'll have a larger audience than just locals. I must say, the last year or so interest in my work has been really picking up. I have sold more work, I've had my first couple of sales from this website, I've had my first repeat customer and now another repeat customer who is also commisioning a piece...plus this big show coming up. I have dreged along in obscurity for so long, this is a very exciting time for me.

For all you artists out there, never give up. No matter what, there are probably people out there who will love your work and want to take it home to love it and give it a good home. You just have to work as hard at getting your work seen as you do creating the work. Granted, I don't sell my work for very much money at all, but it's a start. My prices are going up for my summer show however, by %15 which is what my favorite "how to become a professional artist" book says. (The book is actually titled: "Taking the Leap".

OK, I better sign off and get something to eat. I am making a vow to you now that I will complete the mixed CDs I've been creating for those of you who have sent me yours, and I WILL have them in the mail on this Saturday. That is my pledge to you.

Oh, by the way, on a completely different note, I have discovered that I have this weird affect on electronics. Like, sometimes light bulbs will go out when I enter a room, or equipment will fail. Tonight the microfilm machine I tried to show my class died mid print. My scale recently started to tell me my weight in stones, which is a complete mystery to me...and my stereo in my bedroom turns itself on and starts playing music at various times of the day and night. If I didn't know better...

Anyway, there is this very cool site that has archival photos of Douglas, which used to be the big population center back in the goldrush days. I live a couple blocks from the Treadwell historic trails which go through lots of old mining artifacts etc. It's kind of creepy but really beautiful as well. I want to take some photographs out there the next sunny day we get. I was going to use one of the old mining buildings as a location for Kite Club but it was too difficult to get our equipment out there and it's in a big rain forest so...no go. But, I am curious to find out what used to be built on the lot that is now my home.

Here is a link to a site that has some goldrush era photos of Douglas and the Treadwell area, which as I said, is just a few blocks away. You can click on small images to make them larger.

Historic Photos of Douglas and Treadwell